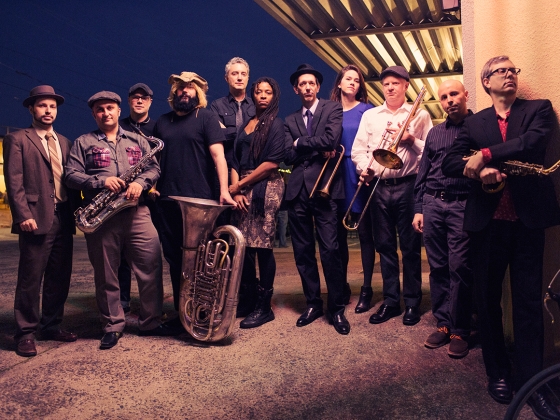 "This is an amazing ensemble, playing music like no others these days. There hasn’t been big band music as exciting as this since forever...GTO is creating its own electrifying musical gold." - Andrew Velez, New York City Jazz Record

"Carpenter leads a suberb band of New York-based vanguardists and while most of the solos ditch period authenticity and employ a vocabulary that contains ideas from the next 90 years of jazz history, his sharp arrangements retain the contrapuntal flash, sweet voicings, and fiery rhythms of the original era..." -- Peter Margasak, Downbeat

The Ghost Train Orchestra was founded in 2006 by composer/arranger Brian Carpenter. That year Carpenter was hired as the musical director for an event marking the 90th anniversary of the historic Regent Theater in Boston. He rediscovered music from a transitional time and place in America: the late 1920s Chicago and Harlem, when the jazz orchestra was being developed by bandleaders such as Fletcher Henderson, Don Redman, Tiny Parham, Fess Williams, and Charlie Johnson. Carpenter began transcribing the parts from old 78s and arranged the music for a 9-piece ensemble to back performers on stage. The reaction to the band's debut at the Regent was tremendous, and since then the band has performed regularly in New York City, home of all its members except the leader, a Boston resident. In 2008, Carpenter arranged the music with added strings, voice, and musical saw, and the following year recorded the band in New York City at Avatar Studios with engineer/producer Danny Blume. The result of this work accumulated in Hothouse Stomp released in 2011.

The Ghost Train Orchestra released their second album, Book of Rhapsodies in 2013, featuring wild new arrangements of "chamber jazz" from the mid-to-late 1930s. Their third record Hot Town featuring saxophonist Colin Stetson made several top ten lists in 2015. Their fourth album, Book of Rhapsodies Vol. II, was recorded with a 12-person choir and was released to critical acclaim in 2017.

Ghost Train Orchestra is currently working on their fifth record, a collaboration with Kronos Quartet reimagining the music of Louis Hardin aka MOONDOG.